Why Technology Matters for Children, The Digital Divide

“Community Technology Programs Deliver Opportunities to Youth” is an 8:46 minute video in which young people help tell the story of why access to quality technology and training matters to their future. The video covers health improvement, educational achievement, workforce training and civic engagement of young people through the use of information and communications technology.

Produced by the youth of the Bresee Foundation together with The Children’s Partnership ©2007.

Yesterday I came across The Children’s Partnership, this is the first in a series of posts highlighting some of the fabulous resources on their site.

The Children’s Partnership is a national nonprofit, nonpartisan child advocacy organization with offices in Santa Monica, CA and Washington, DC.

We undertake research, analysis, and advocacy to place the needs of America’s over 70 million children and youth, particularly the underserved, at the forefront of emerging policy debates.

The hallmark of The Children’s Partnership is to forge agendas for youth in areas where none exist, to help ensure that disadvantaged children have the resources and opportunities they need to succeed, and to involve more Americans in the cause for children.

These Digital Fact Sheets are great, not only do they include statistics on the digital divide, technology skills and the opportunity gap they compare your state to the national average.  They provide a citation for where the statistics were gathered, a value resource when writing grant proposals, make justifications and aligning projects with your strategic plan. I’ve included the GA one at the bottom so you can get an idea.

Developed by The Children’s Partnership, these state fact sheets provide key data regarding technology and youth, making particular note of problem areas. Use these fact sheets to determine where your state stands and to push for improved digital opportunity for youth. Click on a state to access its fact sheet. For Hawaii and Alaska, click on the state name in the list below. 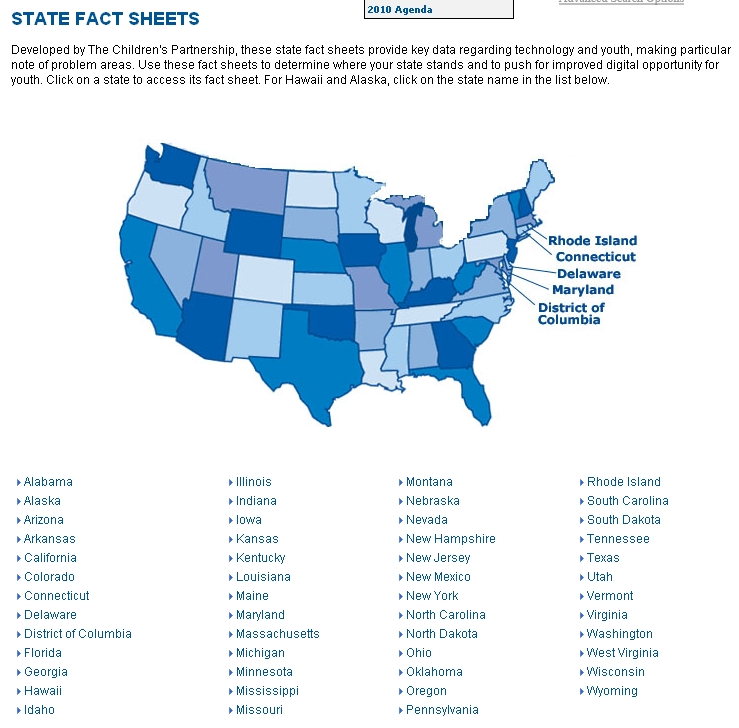 Georgia Fact Sheet
THE NEW WORKFORCE: BENEFITS OF BEING PREPARED WITH TECHNOLOGY SKILLS

HOW WIDE IS THE DIGITAL OPPORTUNITY GAP?

GEORGIA’S YOUNG PEOPLE MOST IN NEED

[3] U.S. Department of Labor, Bureau of Labor Statistics, Covered Employment and Wages as reported in American Electronics Association, Cyberstates 2007: A State-by-State Overview of the High-Technology Industry. State rankings associated with footnotes #3-4 are based on data that includes Puerto Rico and Washington, DC, along with the fifty states. A ranking of #1 represents the best state; a ranking of #52 represents the worst. (Not available online.)

[5] Ibid. Calculation by The Children’s Partnership.

[6] U.S. Census Bureau, Current Population Survey: Computer and Internet Use 2003, special tabulation by the U.S. Department of Commerce. Calculation by The Children’s Partnership. (2003 represents the most recent data available.)

[7] Ibid. Calculation by The Children’s Partnership.

[8] Ibid. Calculation by The Children’s Partnership.

[11] Market Data Retrieval, “2005-06 Public School Technology Survey,” and unpublished tabulations from MDR’s Public School Technology Survey (2005), as reported in Education Week, Technology Counts 2007: A Digital Decade. This figure includes only computers that are available for student instruction. High-poverty schools refer to schools in which more than half the students are eligible for the federal free or reduced-price lunch program. March 6, 2008: 3. http://www.edweek.org/media/ew/tc/2007/GA_STR2007.pdf

[13] The Children’s Partnership, review of the Department of Education Web sites for the 50 states, conducted December 2007.