YOUmedia, Coming to a City Near You

The MacArthur Foundation and the Institute of Museum and Library Services (IMLS) announced plans to create 30 new youth learning labs in libraries and museums nationwide. These labs will be modeled on YOUmedia, an innovative digital space for teens, at the Chicago Public Library.

The competition application process, which will include a request for proposals, will be announced in 2011. Check back with Spotlight regularly for stories and updates.

“This partnership helps to advance IMLS efforts to make libraries and museums places for 21st century learning.  Projects like YOUmedia are pioneering efforts that use research and evidence to demonstrate how our nation’s libraries and museums can be powerful and innovative spaces for young people’s out-of-school learning,” said Marsha L. Semmel, IMLS acting director.

“Utilizing YOUmedia has redefined who I am as a person,” says Jabari Mbwelera. “I knew I wanted to do something with audio. But I didn’t have the skills or the tools that I needed to do what I wanted to do.” Mentors at YOUmedia helped Jabari gain those skills, and he and his friends have sparked each other’s creativity. Today, Jabari is on his way to college to major in audio engineering. “So yeah, it’s really changed my life,” he says.

Like Loading...
Posted in Best Practices. Tags: competition, digital media lab, grant, institute of museum and library services, media lab, YOUmedia. Comments Off on YOUmedia, Coming to a City Near You 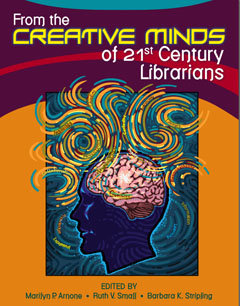 From the Creative Minds of 21st Century Librarians is CDL’s first e-book project made possible in part through an IMLS grant awarded to CDL in 2008 to update the AASL standards in the S.O.S. for Information Literacy database.

This 275-page free downloadable resource contains dozens of lesson plans that implement AASL’s Standards for the 21st-Century Learner in the context of the curriculum. Contributing authors include more than 30 teacher-librarians. The book, edited by Marilyn P. Arnone, Ruth V. Small, and Barbara K. Stripling, was more than a year in the making and features a foreword by Barbara Stripling and graphic design by Marguerite Chadwick-Juner. If you are looking for creative ideas that target the standards to implement in your school library, this book will help you jumpstart the process.

The Center for Digital Literacy (CDL) is an interdisciplinary, collaborative research and development center at Syracuse University dedicated to:

(1) understanding the impact of information, technology and media literacies on children and adults (particularly those from underserved populations) in today’s technology-intensive society.

(2) studying the impact having or not having these literacies has on people, organizations, and society.

This interdisciplinary approach allows us to look at issues from a variety of perspectives and to exchange ideas that broaden and enlighten approaches to research in this area.

YOUmedia is a joint venture between the Chicago Public Library and Digital Youth Network, the YOUmedia expansion is funded by federal stimulus dollars, the City of Chicago and private investment from theMacArthur Foundation and the Chicago Community Trust.

High school age teens engaging with YOUmedia can access thousands of books, over 100 laptop and desktop computers, and a variety of media creation tools and software, all of which allow them to stretch their imaginations and their digital media skills. By working both in teams and individually, teens have an opportunity to engage in projects that promote critical thinking, creativity, and skill-building.

Mentors from Digital Youth Network as well as Chicago Public Library librarians lead workshops to help teens build their skills and create digital artifacts – from songs to videos to photography to blogging. Teens learn how to use a variety of technology and digital equipment, including still and video cameras, drawing tablets, and video and photo editing software. YOUmedia also provides an in-house recording studio featuring keyboards, turntables, and a mixing board.

Now, just over a year after its launch, YOUmedia is expanding to branch libraries in three underserved communities: Pilsen, Englewood and Humboldt Park. The first two locations are scheduled to open this winter, while the Humboldt Park space will be housed in a new library that will open its doors in summer 2011.

Description: YOUmedia, an innovative 21st century learning space for teens, is located at the Harold Washington Library Center in downtown Chicago. The first-of-its-kind 5,500 square foot place is home to thousands of books, laptop and desktop computers and a variety of media tools and software, including a recording studio. Because of its ability to successfully engage young people, YOUmedia was recently recognized by President Obama, and has inspired the creation of 30 similar hands-on learning centers across the country.

Like Loading...
Posted in Best Practices. Tags: transliteracy at work, YOUmedia. Comments Off on YOUmedia, Preparing Children for a Transliterate World

Transliteracy and Libraries for the National Network of Libraries of Medicine

[tweetmeme source=”Strng_Dichotomy” only_single=false]
Last week Bobbi and I had the pleasure of presenting Transliteracy and Libraries for the National Network of Libraries of Medicine, Southeastern/Atlantic Region.

This presentation was used to explain and inform people about the concept of Transliteracy but to also so how it is specific to the field of medical librarianship. Below are the slides from the presentation, in addition to this you can listen and watch the archived session here. Also, we would like to thank Dale Prince for asking use to share this with the medical library community.

Links to information mentioned in this presentation:

The iPad and Healthcare

Like Loading...
Posted in Presentations, slideshow, Webinars. Tags: libraries, medical libraries, nn, NNLM, transliteracy. Comments Off on Transliteracy and Libraries for the National Network of Libraries of Medicine

What is digital Citizenship?

Digital citizenship can be defined as the norms of appropriate, responsible behavior with regard to technology use.

The publications page links to articles about digital citizenship, for more reading